"My Country Needs More Help From the U.S."


“MY COUNTRY NEEDS MORE HELP FROM THE U.S.” 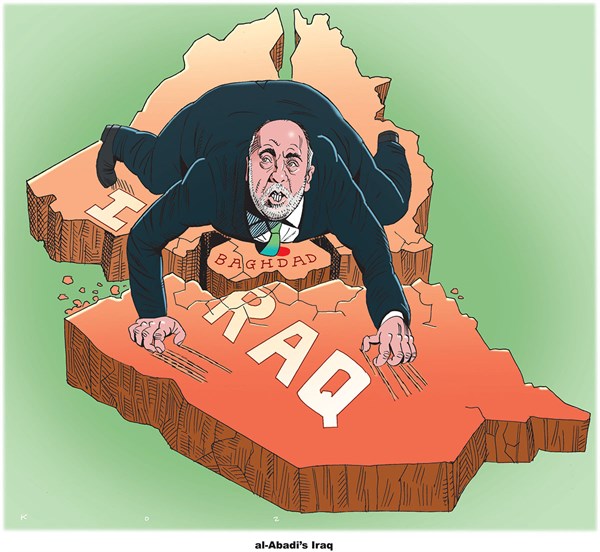 This is the title of an article by Iraq’s Premier Haider Al-Abadi, recently published in the “Washington Post” (Iraqi prime minister: My country needs more help from the U.S. at https://www.washingtonpost.com/opinions/iraqi-prime-minister-my-country-needs-more-help-from-the-us/2017/03/23/3fff51a0-0fdb-11e7-ab07-07d9f521f6b5_story.html?utm_term=.b1abe6cd61ab&wpisrc=nl_opinions&wpmm=1 ). Naturally, Abadi makes his bid commending Iraq and her armed forces and cajoling the US for support and financing. We should not, however, take his every word at face value. Let’s check:

Iraqis standing together against the cruelest killers on Earth.
(…) build an Iraq worthy of what we are: a pluralist people, steeped in history, striving to build one nation in peace and mutual respect.
We must reconcile our society across sectarian and ethnic lines.
(…) preserving our sovereignty and ensuring that no neighbor exercises outsize influence within our country.

The part about “Iraqis standing together” is really questionable and the same goes for “mutual respect”. Reconciling sects and ethnicities is almost a utopia and sovereignty preservation is denied by the facts on the ground and by the Premier’s own plea for full US engagement.

We see the increasingly autocratic and thuggish KRG trying to take control of disputed territories and to get a foothold on traditional Sunni land, such as Mosul.

We see the Iraqi government in Baghdad at loggerheads with the regional government in Arbil which, in turn, is increasingly beholden to Turkey.

And we do not see, at least not yet, the Sunnis fully embracing the hedonistic new order proclaimed by Abadi.

What I do see in a post-Mosul Iraq is:
* Turkey and Iran vying for influence, power and presence in Northern Iraq.

* A multi-faceted Shia political and security establishment striving to keep and apportion power and perks.

* A creepy Al Maliki lurking and planning a comeback.

And, facing this scenario and looking at precedent, I regard a full-fledged Sunni integration into the political, security and economic mainstream with deep skepticism.

O ye of little faith, I might say to myself.

P.S. All of Abadi’s writing, focus on a single ultimate goal: to present an appealing way forward for Iraq in order to ask Americans to assist us as we restore our infrastructure and diversity and partially privatize our economy. We need U.S. investment to rebuild our housing, hospitals, schools, sanitation facilities, roads, highways and bridges. We can also benefit from Americans’ technical expertise as we improve and expand our telecommunications, information technology and health-care sectors. Iraq needs U.S. financiers and corporate partners to help us develop agriculture, petrochemicals and other industries.

So, he wants Washington to pay for Iraq’s reconstruction across the board, far exceeding the scope of Donald Trump’s infrastructure investments for his own country. Asking Trump to splurge money in Iraq, where the main players range from skeptical to outright hostile towards America is a very, very long shot indeed.