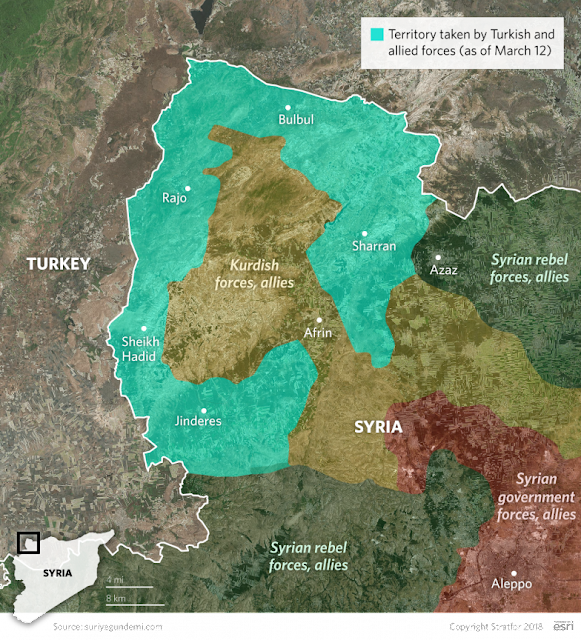 The geopolitical situation in Northern Syria last Spring.
in “STRATFOR” at www.stratfor.com

There is a great agitation in the United States defence’ and foreign policy establishments over President Donald Trump’s decision (intention?) to withdraw the remaining 2000 US troops deployed in Syria.

The bogeyman of choice is none other than the Islamic State (IS). Accordingly, the eventual withdrawal would put the IS back in the game, on the rise to power and glory. This, of course, borders on the ridicule. The IS has been severely battered in Syria and Iraq, it is extremely weakened, it lost almost all the territory it controlled, it lost many fighters and has diminished pride and moral. This does not mean it is dead (the total annihilation of the Islamic State down to the last man is not a viable nor an essential outcome), but it lacks the short, medium term ability to pose a relevant military threat.

However, the critics brandish other reasons, such as the fact that, without a military presence on the ground in Syria, the United States cannot rein in Bashar al Assad, nor exercise leverage over the regime. Once again, this is a non-argument. The US has long lost leverage in Syria, but for some regions, which do not include the major cities.

The Syrian government has dug in during the war, managed to prevail (with strong outside assistance) and now faces no imminent threat to its survival. Furthermore, Assad’s position rests on a triple backup besides the Syrian Arab Army: Russia, Iran and the militias, including Hezbollah, provide political and economic support and abundant firepower and face no match in the country.

The major drawback of the withdrawal is North Eastern Syria, controlled by the Syrian Kurdish YDF and where most of the 2000 American troops are based. Turkey has long yearned to wipe out the Syrian Kurdish control over Northern Syria. She has managed to accomplish that in the Afrin area, but the presence of Russia and the United States has prevented her from going further. The prospect of the American departure has left Erdogan salivating. Notwithstanding, the Kurdish position will not necessarily be untenable. They would, (if they have not already done so) seek an opening to Bashar al Assad to reach a compromise under which the territory they control would reintegrate the Arab Republic of Syria, thus being under the aegis of Damascus, but keeping a reasonable modicum of autonomy.

Besides, the YDF has significant combat experience in the Syrian War, are well equipped militarily and would be fighting for its very existence and, possibly, for their people’s survival, so a rough and nasty war is to be expected if it comes down to that.

Another drawback is a minor one and has to do with the containment of Iran. That would be a strategic coup against Teheran, but it is not a viable prospect in the present geopolitical and military context of Syria.

Last Wednesday, the withdrawal opponents apparently got a boost when an American patrol in Syria was ambushed and 4 servicemen were killed by a suicide improvised explosive device. Conclusion drawn: the Islamic State is alive and well. The US must remain in Syria.

This is obviously farfetched. It is not a single (or three, or six) targeted attacks, actually more of a terrorist attack, that will mark the Islamic State’s rebirth. This sort of attacks in Syria, Iraq, Afghanistan and elsewhere will be a relatively common feature for a long time, regardless of there being US troops on the ground or not. Actually, using the same logics, one could even say that if the withdrawal had already been completed, no more American soldiers would have perished in combat in Syria. Anyway, this is hardly the point. One does not change the plans for a military deployment or withdrawal contingent on the occurrence of a terrorist attack that leaves four dead, ours or theirs.

Now, what can the American contingent in Syria hope to accomplish?

Not much, besides supporting/protecting the Kurds and containing the Turks.

Will this mean the US has “lost” Syria?

No. It was never hers to lose.

The US has never held any substantial leverage in or over Syria in terms of the reality on the ground and the Americans forfeited that possibility when they ducked an imminent intervention in the Syrian Civil War in September 2013. Russia’s direct military involvement in late 2015 further reduced the chances of that ever happening.

So, the United States is facing this situation:

* The Islamic State is severely weakened and devolving from an insurgent organisation back to being a terrorist one.

* The US has little to no leverage in Syria.

* Syria is not and never was, of major strategic importance to the US.

* Donald Trump included in his electoral manifesto the US withdrawal.

So, there is a handful of good reasons for the United States to say goodbye to Syria.