International Relations are mostly about Power and National Interest. Nowadays, however, they are also about taking the moral high ground. Accordingly, OUR intentions are the best and invariably ethically commendable. On the other hand, THEIR intentions are self-interest motivated, illegal and morally evil.

Ukraine, like other hotspots, offers ample evidence of Double Standards. 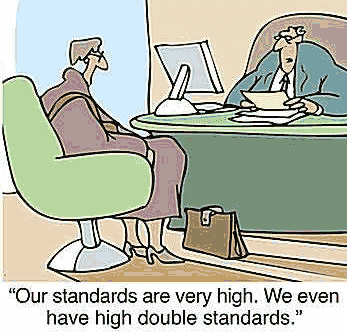 The USA, Germany, Poland and others, heretofore referred to as the West, promptly recognized the new government.

1- Viktor Yanikovych was democratically elected in 2010 and his mandate would only end in 2015.

2- Aleksandr Turchynov assumed the post of President without a popular mandate and the same can be said about the government led by Arseniy Yatsenyuk.

3- On the 21 February, Yanukovych and the opposition signed an agreement brokered and sponsored by Berlin, Paris and Warsaw, according to which, some presidential powers would be devolved to parliament and Yanukovych would stay in power at least until early elections took place in the Spring.

4- This notwithstanding, the President had to flee the Ukraine the following day.

6- Furthermore, this non-elected government has signed agreements with the IMF and the EU that entail serious long-term commitments on Kiev’s part and a great deal of enduring and very painful sacrifices for the Ukrainian people.

Of course what mattered here was that the new powers that be, favoured the interests and the agenda of the West. Real legitimacy was just collateral damage. Obviously the same could be said about Russia.

Russia labeled the protesters (a.k.a. rebels) in Kiev and Western Ukraine as terrorists, fascists, thugs, illegal, anti-semitic and purveyors of their alleged Western sponsors’ interests.

The West dubbed the protesters (a.k.a. rebels) in Eastern Ukraine (and Crimea) as Russian-manipulated, violent, illegal, para-military and wholly unacceptable. The new government in Kiev likes to call them terrorists.

In fact, these protesters (a.k.a. rebels) are very much alike, which is of course anathema for Moscow, Washington and Berlin, adamant as they are about their own morality, their own legitimacy and their unique concern for the Ukrainians’ well-being.

These claims notwithstanding, all these groups engage in illegal and violent activities, serving their own interests and those of their sponsors, whether domestic or foreign.

Imagine that a significant number of Portuguese people would rebel against the Memorandum of Understanding signed by the three major parties with the IMF, the EC and the ECB and that has caused excruciating and unwarranted hardship on the Portuguese people.

Imagine that this angry mob, part of which was trained and funded by a foreign power, occupy and ransack numerous government buildings, sequestered government officials and killed a few others, resisted and attacked the police and seized weapons depots.

Imagine that eventually the government resigned and the President and the Prime-Minister would flee the country. Then the organized groups within the rebellious crowd would constitute a new government.

Imagine what Washington, Berlin or Brussels would think and do? Would they actually recognize and acclaim the new order? Of course not. It would not be in their interest. Period.

Double standards are common practice in politics and International Relations and they derive from the pursuit of national interest which is frequently somebody else’s loss. But the international actors could spare us the moral posturing. That level of hypocrisy just adds insult to injury to everyone who sees beyond the lame protests of innocence and good faith.


A Festa do Golo!